Python is an advanced programming language that a user can develop his own program in a Raspberry Pi. By using suitable Raspberry Pi libraries the programs can structured in a proper manner without any complexity. For example, python based OPEN CV for raspberry pi lets a user to make the project in image processing.

For getting a python shell with full privileges, open the LX terminal and type: 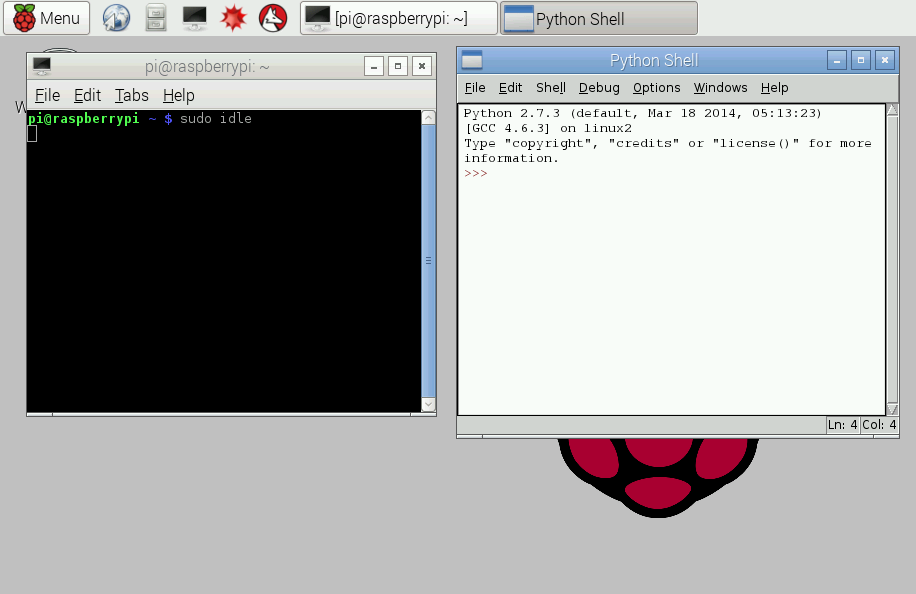 Python shell is an interactive interpreter where a user can check python commands. When a script program is made to run then the corresponding results could be showed in a python shell and there by a user can verify it. In a Python shell a user can perform simple calculations, printing a string, string concatenation etc. 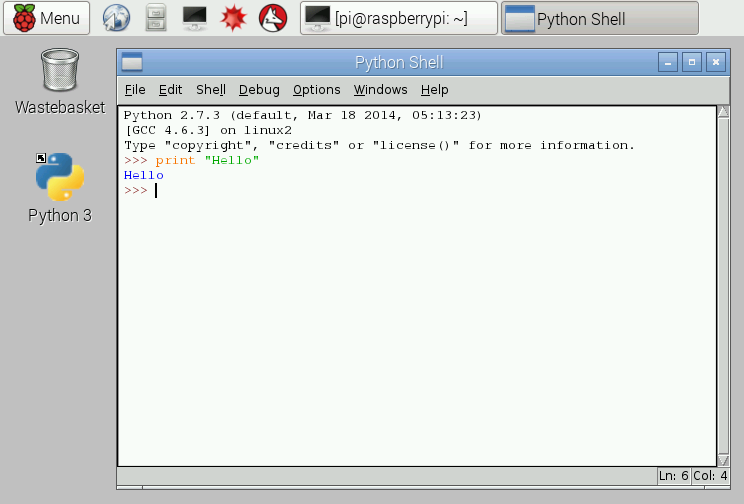 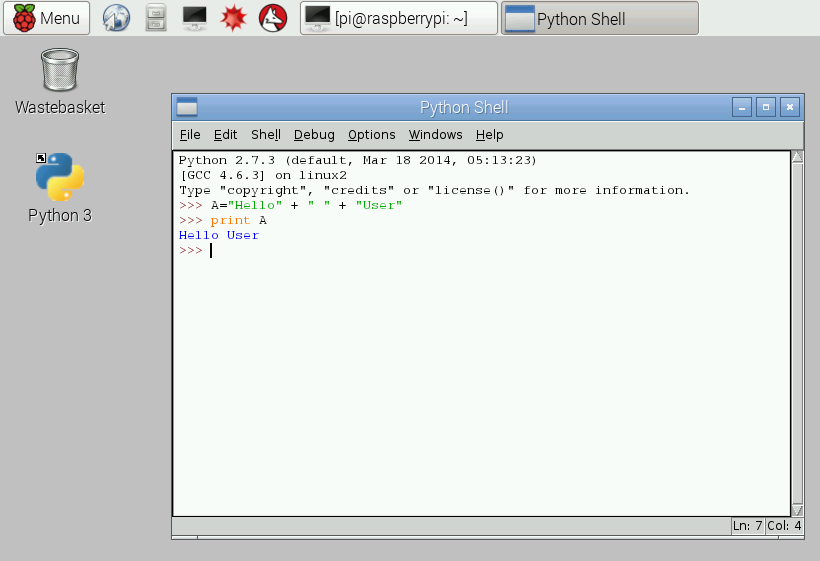 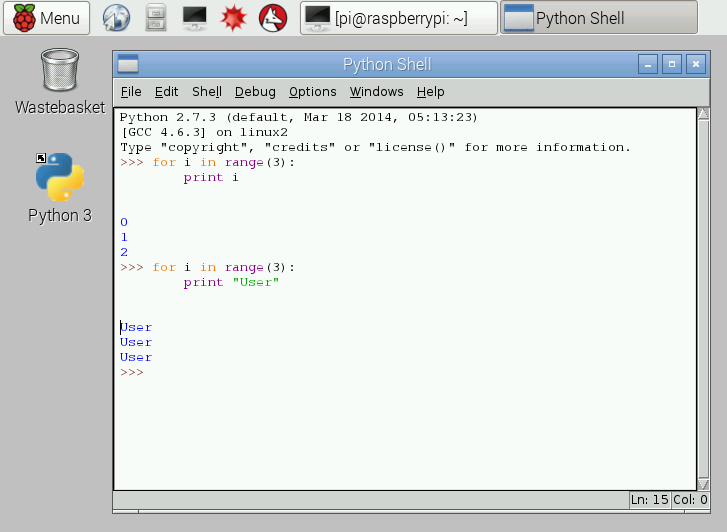 Python editor files will persist in the form of .py format. We can write the corresponding program in the editor file and save it in a suitable folder. The suitable indications can be viewed in the python shell itself. 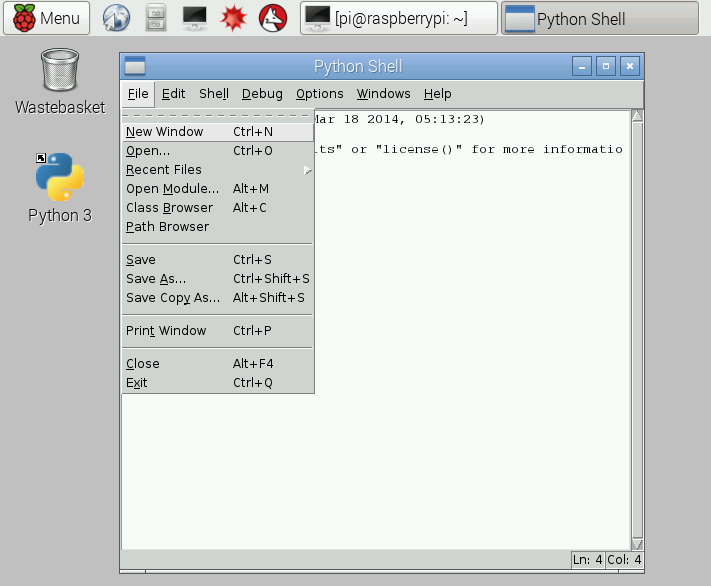 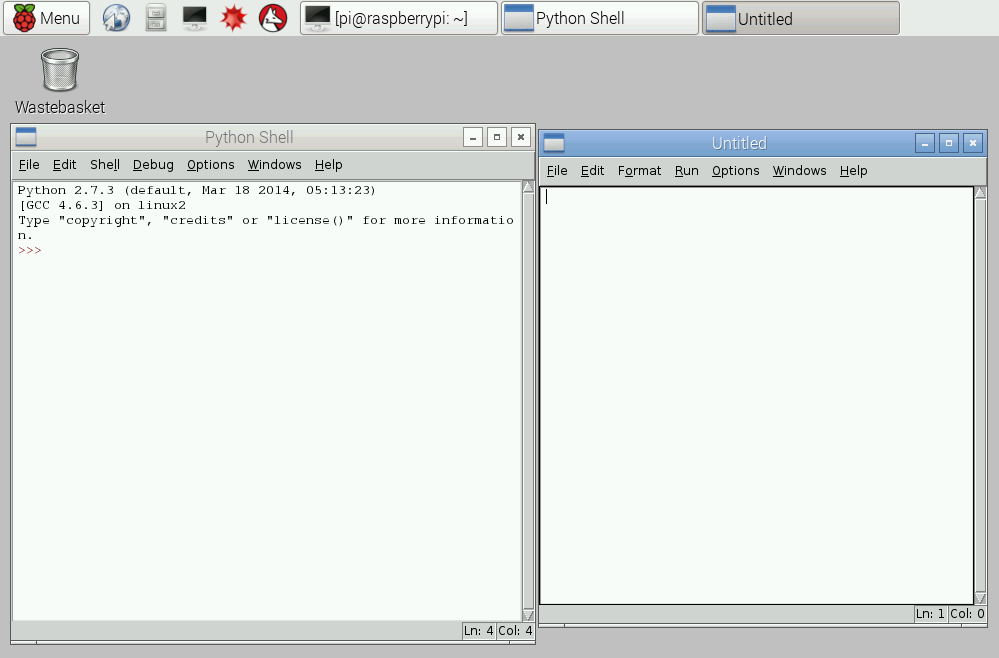 The figure shown above gives a correct picture of how an Led is connected to the pins of Raspberry Pi 2. Here we select pin number 7 as the output pin for giving a positive supply. There are also other pins shows in the GPIO pinout diagram which could be used for the same purpose. Pin number 7 is connected to the positive terminal of the led through a 1k resistor which is for limiting the current to avoid the damage of led. Pin number 6 is the ground pin of the raspberry pi2 and it is connected directly to the negative terminal of the led.

Power up the Raspberry Pi and connect the led to the suitable pins as shown above. Open a python shell and a python script file to write a program for led blink.

As we are performing the operations based on the GPIO pins, there is a need of installing RPi.GPIO Python library. This library will gives the access to read-write the input/output pins on the Pi’s GPIO header within a Python script. By using this library we can control the GPIO header with appropriate python programs.

This library could be installed by two methods with a proper internet connection:

Then install the RPi.GPIO package with the suitable command:

The installation procedures are the same as we discussed in the previous section.

After installing the library open the python editor to write the program. Enter the program as shown below:

Run the program and we can see the led will light up for one second and then it will off.  For blinking a led for a certain period of time insert a for loop in the on-off condition. 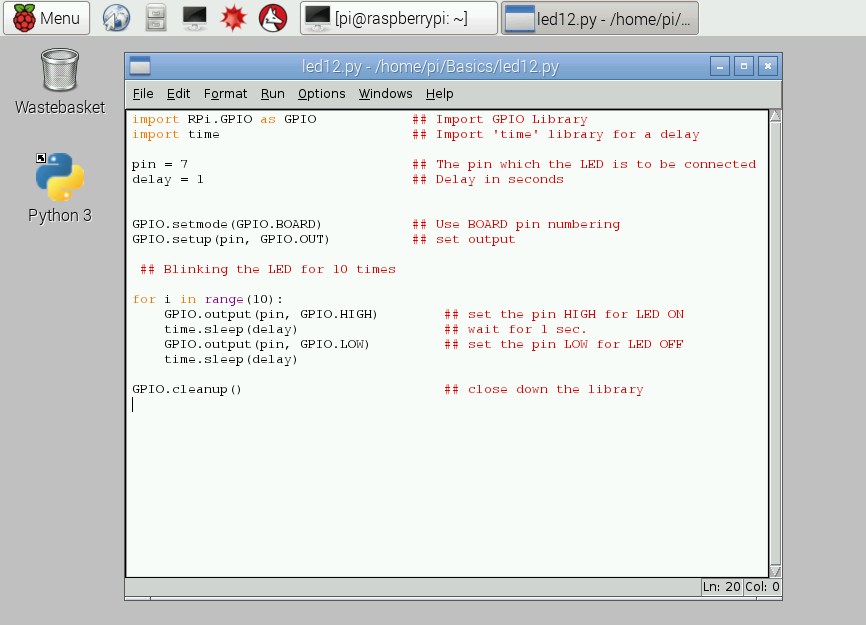 As the code shown above is made to run, the led will blinks for ten times with one second delay. For running this script for infinite times insert a while loop. Then the led will blink continuously and to terminate this operation press Ctrl+c which is the keyboard interrupt command. 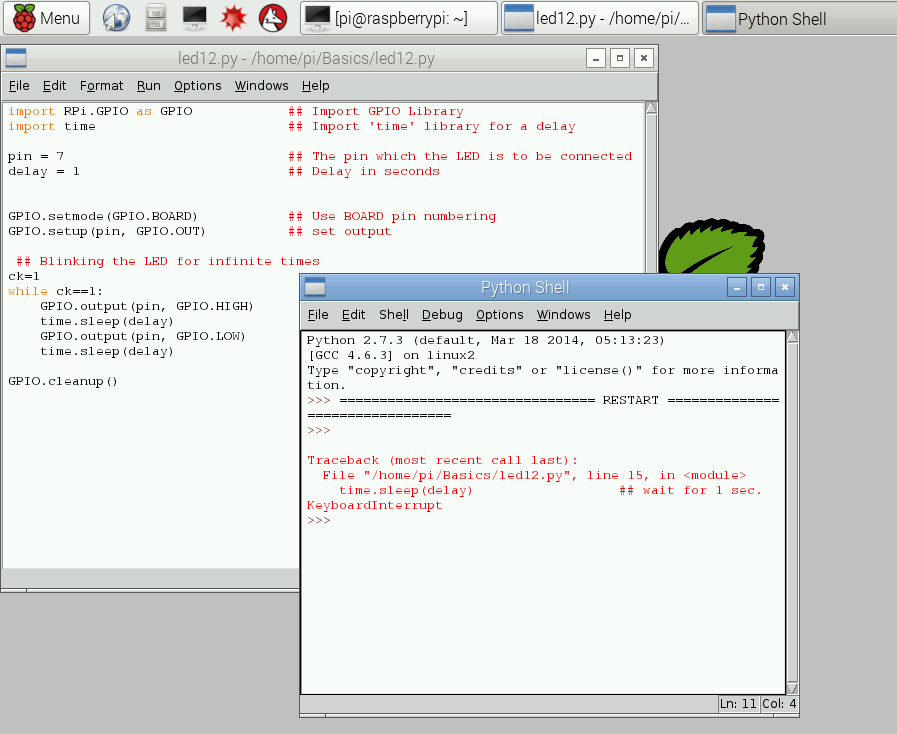 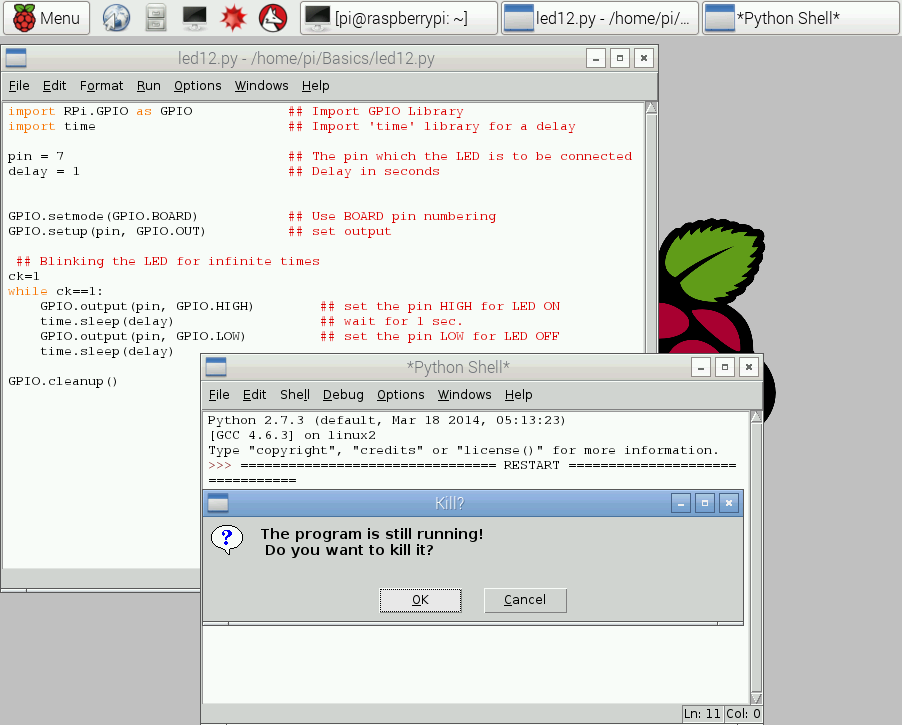 By clicking on ok the program will be terminated and the python shell will be closed. 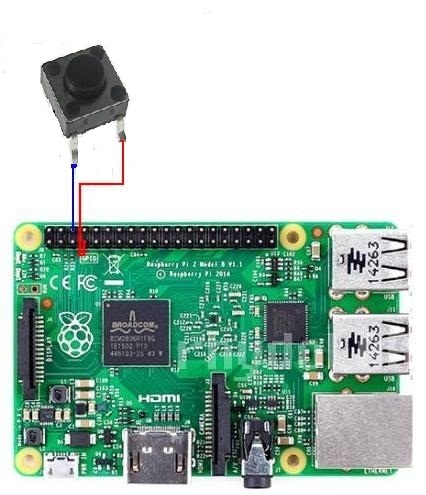 Make the suitable connection as shown above.  When the switch is pressed, it will connect pin 7 configured as an input to ground. The input pin is pulled up to 3.3V by the command;

By giving this command the pull up resistor is enabled, as each GPIO pin has software configurable pull-up and pull-down resistors. When the button is pressed the false state will be returned. the figure given below has a sample code and the indication result in the python shell. 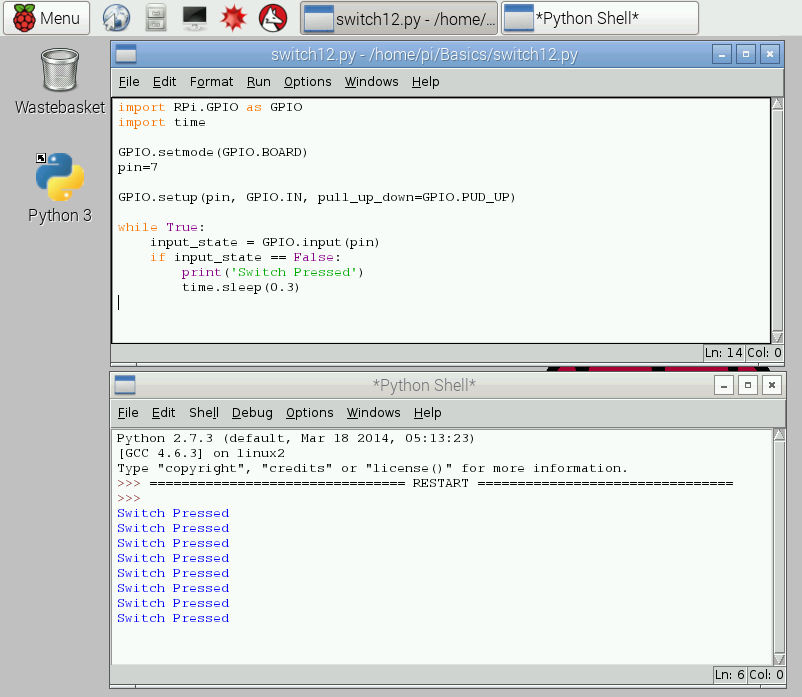 We can perform many operations based on this button by writing the program after reading the input state of the button.

Q: Why we are entering sudo idle for opening a python shell ? Shall we open it directly ?
Ans: Yes we can. But it is recommended to open a python shell using sudo command to get full privileges to the written code.

One Response to "Programming in Raspberry Pi 2 using Python"