With the popularity of Wifi IoT devices, there is an increasing demand for low-cost and easy-to-use WiFi modules. ESP8266 is a new player in this field: it’s tiny (25mm x 15mm), with simple pin connections (standard 2×4 pin headers), using serial TX/RX to send and receive Ethernet buffers, and similarly, using serial commands to query and change configurations of the WiFi module. This is quite convenient as it only requires two wires (TX/RX) to communicate between a micro-controller and WiFi, but more importantly, it offloads WiFi-related tasks to the module, allowing the microcontroller code to be very light-weighted. 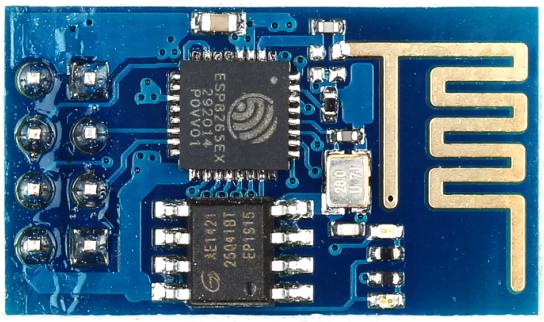 ESP8266 ESP-01 Serial WIFI Transceiver Module is a cheap and easy way to connect any small microcontroller platform, like Arduino, wirelessly to Internet. ESP8266 has powerful on-board processing and storage capabilities that allow it to be integrated with the sensors and other application specific devices through its GPIOs with minimal development up-front and minimal loading during runtime. Its high degree of on-chip integration allows for minimal external circuitry, and the entire solution, including front-end module, is designed to occupy minimal PCB area. ESP-01 WIFI Transceiver Module is addressable over SPI and UART, making this an exceptionally easy choice for anyone wanting to build an Internet of Things thing. You can use AT commands to connect to WiFi networks and open TCP connections without need to have TCP/IP stack running in your own microcontroller: You can simply connect any microcontroller to this module and start pushing data up to the Internet. 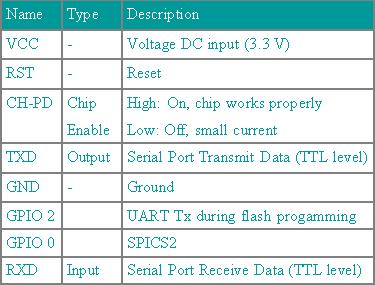 Connect the CH_PD pin to 3.3V to activate the chip.

ESP8266 Communication with other WiFi modules: ESP8266 as a Client

ESP 8266 works in 3.3V TTL so we need a level converter to communicate with our PC. You can use an FTDI converter for this purpose. Make sure that your FTDI is working in 3.3V. Connect your ESP module with the FTDI Driver and plug the FTDI to the USB port of your PC.

For communication you must need another computer or a phone which has WiFi access. Connect the computer or phone with our ESP 8266 module through WiFi. You will have to configure the PC or mobile as server, use terminal software to set the PC as server. In realterm software you can change it in the port settings.
Set the port as server and give a port number.
Example: Server:1234
Here 1234 is the port number. 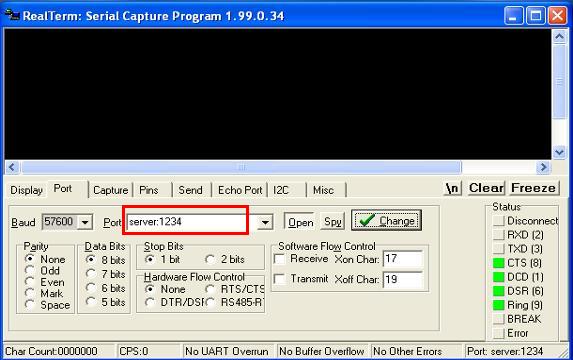 Note: To sent a data from ESP module we must need to know, Type of connection(TCP/UDP), IP address  and port number to assigned  with command AT+CIPSTART. (First three sections of IP address will be same last section only will have some change)

Let’s take a break from networking class to see if your little 8266 module is able to communicate with your network.
For example, 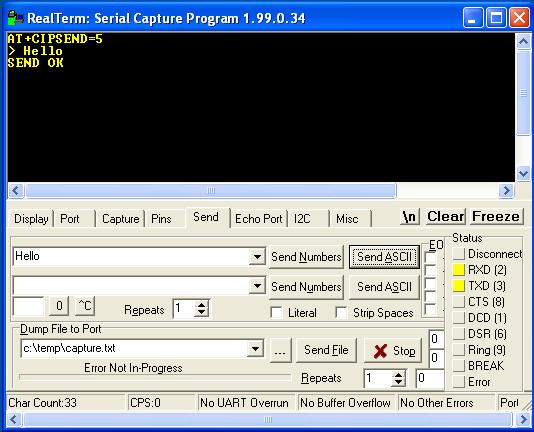 ESP8266 Communication with other WiFi modules: ESP8266 as a Server

The user can configure the ESP 8266 as server by following commands. 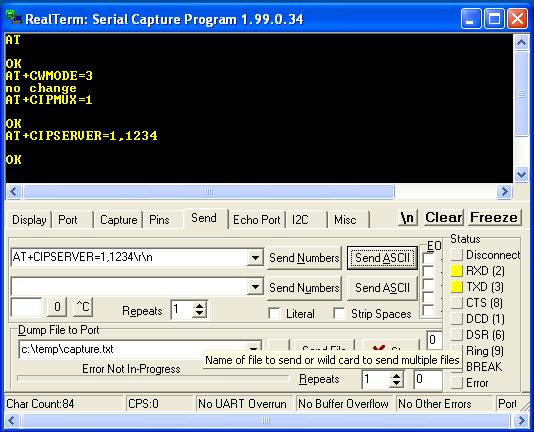 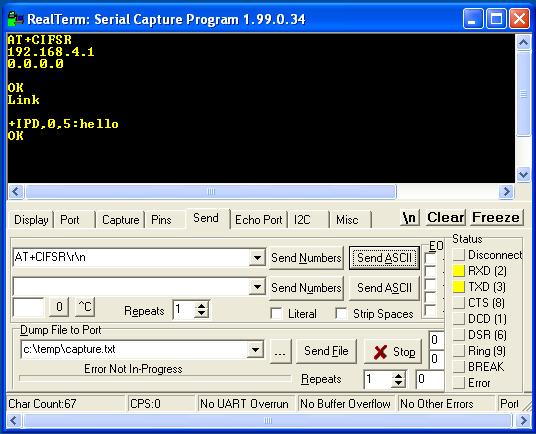 Now take another PC which has WiFI access connect it with our ESP 8266 module. Use terminal software to communicate with ESP 8266. In realterm you can connect the ESP module by setting the port as module IP as shown below, where 1234 is the port number. 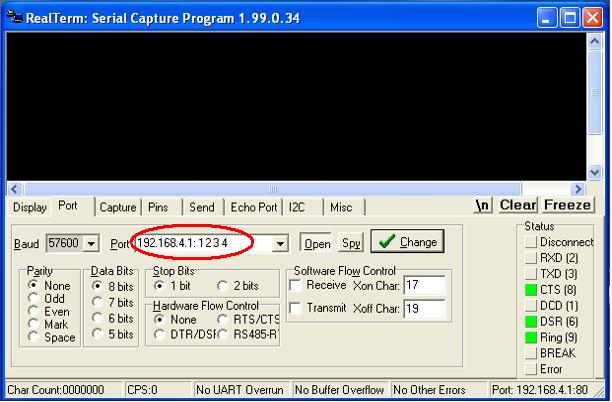 This methods can be used to communicate only when two WiFi modules are in range.

Now we will discuss about Internet of Things (IoT). So by using IoT the ESP module can be accessed from anywhere. In order access the ESP 8266 from anywhere, you should first connect it with an Access Point. The ESP 8266 can be connected to an Access Point by using following AT commands. The common commands for TCP client  and server are explained below lets go through it ..

Configure one of the ESP 8266 module as server and other as client. Client section is explained below. 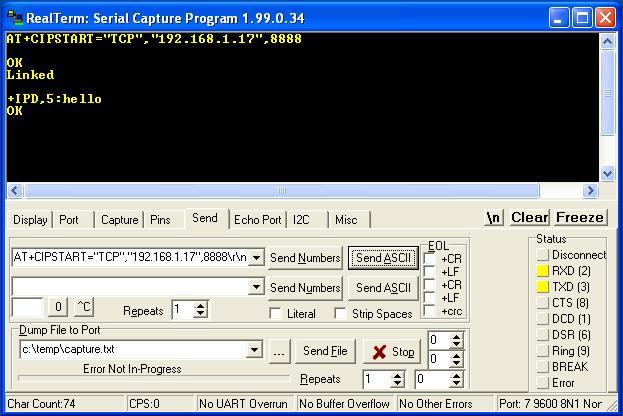 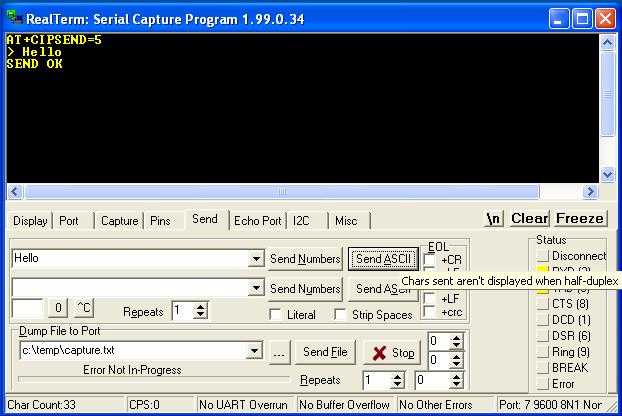 Configure one of the ESP 8266 module as server and other as client. Server section is explained below. 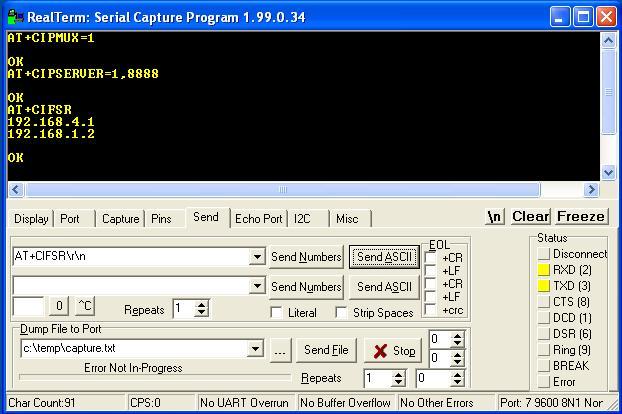 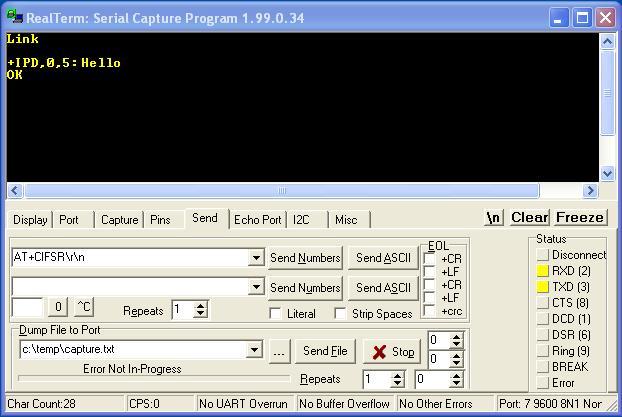 Communication with a web page

After getting > Response send message. Now the characters are sent to the Web browser. But the browser is still waiting for the channel to be closed. To view output the channel should be closed. AT+CIPCLOSE=0 command is used to close the channel. Here 0 is the channel ID. Now, you can communicate from your web browser, your phone, laptop, or other Internet capable device to control your projects. But all connections should be from the same network (ie, from same router). So how can you access your WiFi from outside world, from other network. In order to do so we should forward our ESP port to the internet which is completely a routers task.